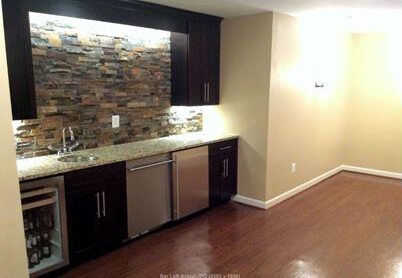 One of the most popular features of design shows on television is when a designer uses computer software to “render” a redesigned room, allowing the homeowner to get a strong visual idea of what the finished room will look like. These computer renderings are especially helpful when the project involves moving walls, enlarging rooms, relocating fixtures, and otherwise changing the shape of a rooms’ footprint.

As designers, we are used to imaging big changes in 3D, but for most homeowners tackling their first major renovation, this can be very difficult. At some point, the homeowner takes a leap of faith and then waits anxiously for the chaos of construction to morph into something wonderful, functional, and reflective of his/her own personality. Even small but expensive changes, like installing plantation shutters, can cause angst as the homeowner tries to imagine all the windows in a room dressed this way.

Unfortunately, many interior designers do not offer computer rendering. It is a time consuming process and requires a high level of competency on one or more computer software packages. Designers tend to be right-brain thinkers – creative, intuitive, artistic. This is what makes us good listeners when a homeowner describes the feeling or look they want in their homes. It’s also what enables us makes us to imagine the changed space and come up with attractive, yet functional, solutions to design dilemmas. Being both skilled and comfortable with computer software is often the provenance of left-brain thinkers, who are organized, systematic, and methodical. A designer who can do both needs to be balanced between right and left brain thinking.

At Studio Starrs Interiors, we’re up to this challenge! Here is an example of a recent project we completed. For this project, the homeowners had a finished basement that wasn’t getting much use. The kids were growing up (one had left for college), and a large children’s play space was no longer a high priority. In the images below, you can see a wall with two doors. Behind these doors were closets – two of several in the basement. The left image is a photo of the wall. The right image is a computer rendering of the same wall. Everything is precisely to scale.

For this project, we suggested the homeowners gut these closets and use the newly exposed recessed area to put in a wet bar. The wet bar would compliment a new theater that was also going in, in a different corner of this large basement.

Here is a rendering of the completed wet bar, done before construction started:

And here is a photo of the finished bar:

As you can see, the bar turned out to be very close to the rendering prepared for the homeowner – before construction even began! Of course, the process doesn’t work like magic. The rendering took several iterations as we changed the cabinetry from black to espresso, selected the stacked stone for the backsplash, and decided on a wall paint color. These iterations take time and money, but the decision making process becomes less of a leap of faith and more about specific design aesthetics, such as the under-cabinet lighting the homeowner opted for, once the project was underway. The confidence in the design, the ability to show your contractor where the project is headed and the peace of mind over the final design are well worth the extra cost.

If you’ve got a big project on the horizon, consider using a designer who can help you come up with a design you love and create renderings of your vision – before the chaos of construction ever begins!